With the Holiday Season upon us, it brings to mind some of the best toys that made superior gifts. These toys were put to the test in various ways by myself and friends and are scarce since they were either destroyed in use, thrown out, or simply misplaced. The list of toys and games that come to mind is extensive, so only the best of the best are here.

The Mentor Game was a great toy and since nobody else had one, it always amused people the first time they saw it and offered a great way to be interactive with the machine itself. The game was easy on the batteries, but the lights were unpredictable and the “Hand” was an easy target to puppy kicks since the wire was flimsy.

Corgi Toys always put out great products since they were almost indestructible and made great display pieces when not in use. The highlight of this toy was the retractable wings located either side of the vehicle just under the running boards. 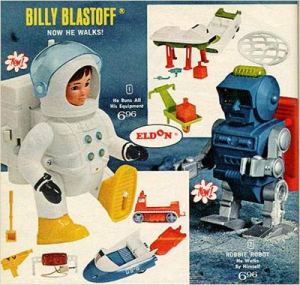 Billy Blastoff offered hours of fun with it’s collection of add-ons powered by Billy. Space toys were all the rage and Billy was very popular with all ages even though it seemed geared to younger consumers.

With a huge array of add-ons, Major Matt Mason is the holy grail of space toys. These toys were rugged and could be used outside which made them the supreme “Adventure” toy. Tested in all weather including snow, they were always up to a new challenge and made for the ultimate toy experience. The attention to detail made you feel like you were actually living the adventures right alongside as you dreamed up new ways of engaging with the assorted items in your collection.

Offered in several configurations, Vertibird was always interesting for male and female “Pilots” and offered stalwart construction. The Copter was powerful enough to challenge it to hoist various items and hovering was always fun. The controls were simple, yet highly entertaining. 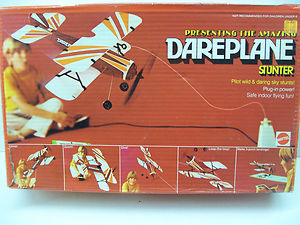 Made by the same company that manufactured Vertibird, Dareplane Stunter was an “Upscale” version which utilized a flexible drive cord (same concept as what drives an analog speedometer) unlike the rigid one found on it’s little brother. More fun than Vertibird, The Dareplane was hard to master and was of extremely shoddy construction. We went through five returns before realizing every one made would suffer the same fate and after the final very frustrating long and complicated set-up, we gave up on it and bought a second Vertibird. 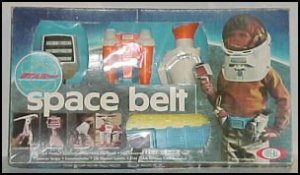 The ability to actually wear the Space Belt made this a great “Travel” toy. The highlight was the drinking tube which could be filled with your favorite beverage of choice. The Space Belt was a great supplement to the “Moon Walker” which was a large all-cardboard toy that came with a moon plaque and built-in handles to facilitate walking the “Lunar Surface” once you crawled up inside the Lunar Landing Module. Various controls were redacted by creating new ones by the lucky owner.